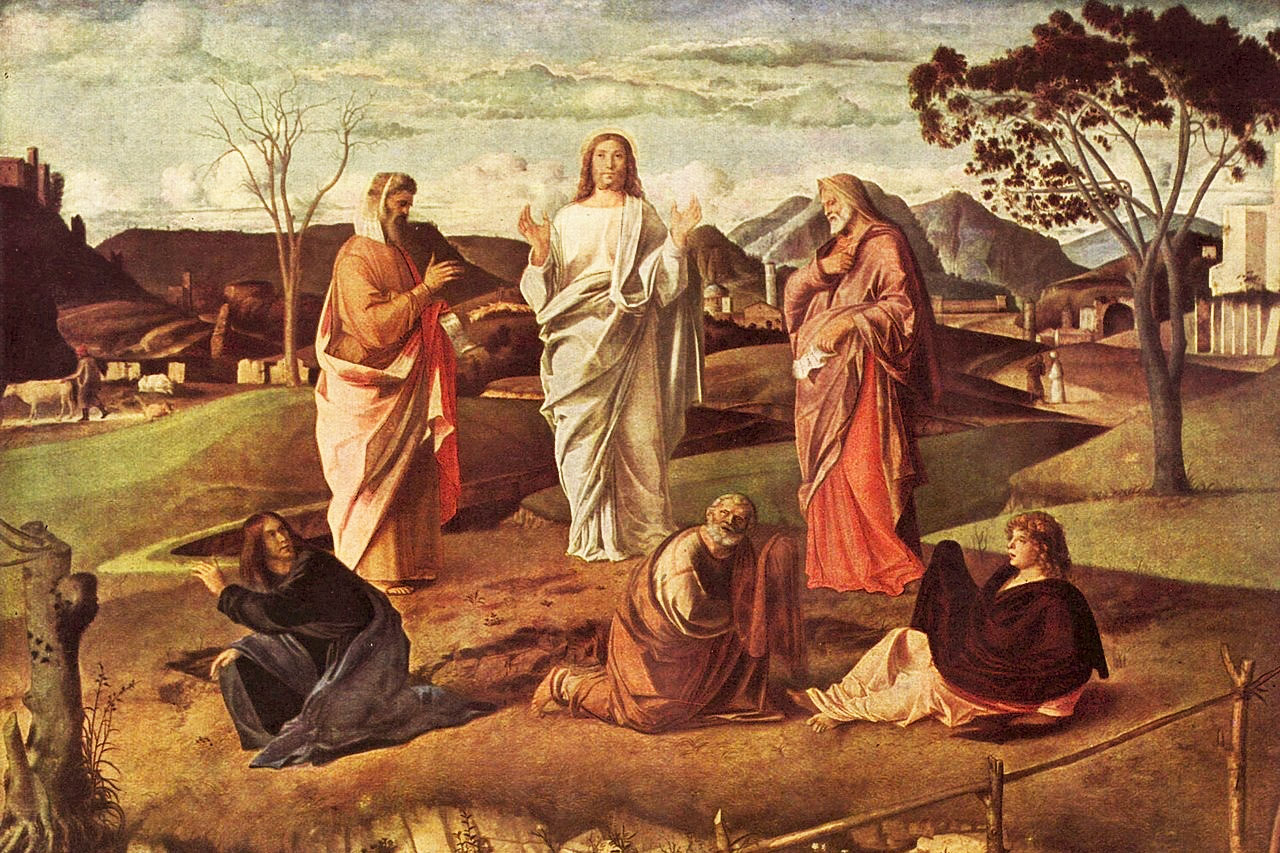 This is nothing fancy, just a little script you might learn from. In Catholic Answers’ seminars we try to emphasize the point that you should always demand that a missionary who comes to your door first establish his authority for what he is going to tell you, and only then proceed to discuss the particular issues he has in mind.

By “authority,” we don’t mean his personal or academic credentials. We mean his authority to claim he can rightly interpret the Bible. The missionary (unless he is a Mormon, of course, in which case his authority is the Book of Mormon) will always claim to fall back on the authority of Scripture. “Scripture says this” or “Scripture proves that,” he will tell you.

First, ask him to prove from the Bible that the Bible is the only rule of faith (if he’s an Evangelical or Fundamentalist Protestant he holds to the Reformation theory of sola scriptura—the Bible alone).

Second, have him tell you how he knows which books belong in the Bible in the first place.

And third, require that he prove to you both that he has the authority to interpret the Bible for you (remember that his doctrines will almost always be drawn from interpretations of the sacred text rather than the words themselves) and that his interpretations will always be accurate.

“Good afternoon, neighbor. May I share a few words of Christian truth with you?”

“From the Bible, of course.”

“That’s your authority? The Bible?”

“Yes, it’s the only authority for Christians.”

“Can you prove that from the Bible?”

A Sufficient Rule of Faith?

At this point the missionary probably will bring up one of several verses. The passage most commonly brought up by Evangelicals and Fundamentalists is 2 Timothy 3:16–17. In the King James Version, the verse reads this way: “All Scripture is given by inspiration of God and is profitable for doctrine, for reproof, for correction, for instruction in righteous- ness; That the man of God may be perfect, thoroughly furnished unto all good works.”

Many claim that 2 Timothy 3:16–17 claims Scripture is sufficient as a rule of faith. But an examination of the verse in context shows that it doesn’t claim that at all; it only claims Scripture is “profitable” (Greek: ophelimos) that is, helpful. Many things can be profitable for moving one toward a goal, without being sufficient in getting one to the goal. Notice that the passage nowhere even hints that Scripture is “sufficient”—which is, of course, exactly what Protestants think the passage means.

Point out that the context of 2 Timothy 3:16–17 is Paul laying down a guideline for Timothy to make use of Scripture and tradition in his ministry as a bishop. Paul says, “But continue thou in the things which thou hast learned and hast been assured of, knowing of whom thou hast learned them; and that from a child thou hast known the holy scriptures, which are able to make thee wise unto salvation through faith which is in Christ Jesus. All Scripture is given by inspiration of God (Greek: theopneustos = “God-breathed”), and is profitable for doctrine, for reproof, for correction, for instruction in righteousness: That the man of God may be perfect, thoroughly furnished unto all good works” (2 Tim. 3:14–17). In verse 14, Timothy is initially exhorted to hold to the oral teachings—the traditions—that he received from the apostle Paul. This echoes Paul’s reminder of the value of oral tradition in 1:13–14, “Follow the pattern of the sound words which you have heard from me, in the faith and love which are in Christ Jesus; guard the truth that has been entrusted to you by the Holy Spirit who dwells within us” (RSV), and “. . . what you have heard from me before many witnesses entrust to faithful men who will be able to teach others also” (2:2). Here Paul refers exclusively to oral teaching and reminds Timothy to follow that as the “pattern” for his own teaching (1:13). Only after this is Scripture mentioned as “profitable” for Timothy’s ministry.

The few other verses that might be brought up to “prove” the sufficiency of Scripture can be handled the same way. Not one uses the word “sufficient”—each one implies profitability or usefulness, and many are given at the same time as an exhortation to hold fast to the oral teaching of our Lord and the apostles. The thing to keep in mind is that nowhere does the Bible say, “Scripture alone is sufficient,” and nowhere does the Bible imply it.

After you have demonstrated that the verses the missionary brings up simply don’t prove this point, continue the discussion this way:

“If you recognize Scripture for what it is, you’ll see it wasn’t intended to be an instructional tool for converts. In fact, not one book of the Bible was written for non-believers. The Old Testament books were written for Jews, the New Testament books for people who already were Christians.

“The Bible is not a catechism or a full-scale theological treatise. Just look at the 27 books of the New Testament. You won’t find one that spells out the elements of the faith the way catechisms do or even the way the ancient creeds did. Those 27 books were written for the most part (excepting, for example, the Gospels and the general epistles such as James and, 1 and 2 Peter) as provisional documents addressed to particular audiences for particular purposes.

“Most of the epistles,” you continue, “were written to local churches that were experiencing moral and/or doctrinal problems. Paul and most of the other New Testament writers sent letters to these local churches (e.g., 1 and 2 Corinthians and Galatians) in order to rectify these problems. There was no attempt on the part of the writers to impart a vast body of basic doctrinal instruction to non-believers nor even to simply summarize everything for the believers who received the letters.”

“I don’t agree with any of that,” replies the missionary. “The New Testament is the basis of the Christian faith.”

“Well, the early Christians agreed on the 27 books,” answers the missionary. “The Holy Spirit led them to this agreement.”

“Sure the Holy Spirit did, but only over a pretty long period of time, and a study of early Christian history shows that there was a considerable disagreement among Christians until the issue of the canon was finally settled. Some early Christians said the book of Revelation didn’t belong in the canon. Others said Pope Clement’s Letter to the Corinthians (written circa A.D. 80) and The Shepherd, an early second-century allegory written by a Christian writer named Hermas did belong in the New Testament. How do you handle that?”

“We know by examining the contents of the books. Some books—like 1 Corinthians and Revelation—obviously belong. Others—like Clement’s Letter to the Corinthians—obviously don’t.”

“But is it really so obvious? Tell me, what is so obvious in Philemon to indicate that it is inspired? And what is so obviously unorthodox in The Shepherd or the Didache or Clement’s letter or any of the other first- and second-century Christian writings? You’ve never even seen the autographs (originals) of the 27 books in the New Testament. Nobody today has. The earliest copies of those books we possess are centuries newer than the originals. Like it or not, you have to take the say-so of the Catholic Church that in fact those copies are accurate, as well as her decision that those 27 books are the inspired canonical New Testament Scriptures. You do accept her testimony as trustworthy, or else your Protestant Bible would not have those 27 books. See what I mean?”

Look to the Fathers

If you happen to have the writings of the early Church Fathers, this would be a good time to read from them. The writings are, at least in the case of the apostolic Fathers, rather short, and you can demonstrate that many of these writings seem every bit as orthodox and inspiring (not to confuse the term with “inspired”) as the New Testament writings themselves. Then read aloud the book of Philemon or 3 John or some other short canonical book.

“Tell me, what’s in these books that so obviously makes them inspired? If you didn’t know that Philemon was written by Paul or that 3 John was written by John, would you give either a second reading? Would you automatically assume they belong in the Bible as canonical Scripture? It’s not disrespectful to say they don’t have much doctrinal content in them—and that’s not surprising, since they’re too short to contain substantial doctrinal discussions. One can imagine the Christian Church surviving well enough without either.

“Neither book claims inspiration for itself. If there is, as a matter of fact, more solid Christian doctrine in other, non-canonical writings (that is—if they contain more Christian truths and no religious errors) then how can you say it’s obvious which books are inspired and which aren’t?”

Here the missionary will fumble around awhile, perhaps repeating his earlier statements. Then you say:

“The fact is that the Holy Spirit guided the Catholic Church over time to recognize and determine the canon of the New and Old Testaments in the year 382 at the synod of Rome, under Pope Damasus I. This decision was ratified again at the councils of Hippo (393) and Carthage (397 and 419). You, my friend, accept exactly the same books of the New Testament that Pope Damasus decreed were canonical, and no others.

“Furthermore, the reason you accept the books you do is that they were in the Bible someone gave you when you first became a Christian. You accept them because they were handed on to you. This means you accept the canon of the New Testament that you do because of tradition, because tradition is simply what is handed on to us from those who were in the faith before us. So your knowledge of the exact books that belong in the Bible, such as Philemon and 3 John, rests on tradition rather than on Scripture itself!

“The question you have to ask yourself is this: ‘Where did we get the Bible?’ Until you can give a satisfactory answer, you aren’t in much of a position to rely on the authority of Scripture or to claim that you can be certain that you know how to accurately interpret it.

“After you answer that question—and there’s really only one answer that can be given—you have some other important questions to ask: ‘If the Bible, which we received from the Catholic Church, is our sole rule of faith, who’s to do the interpreting?’ And ‘Why are there so many conflicting understandings among Evangelicals and Fundamentalists even on central doctrines that pertain to salvation?’”

“We Agree on the Essentials”

“Well, that I can answer easily enough,” responds the missionary. “Evangelicals and Fundamentalists agree on the essentials, but we disagree on secondary matters.”

“Is that so? Where in Scripture do we find some doctrines listed as essential, others as ‘secondary’? The answer is: ‘nowhere’. Evangelicals and Fundamentalists disagree on central issues such as baptismal regeneration and the necessity of baptism (is it merely a sign to other Christians, or does it have a real role in the process of justification?), whether or not one can forfeit salvation (some Protestants say that’s impossible to do, others say it is possible). You all claim to be ‘Bible-only Christians,’ but which group is right?”

NIHIL OBSTAT: I have concluded that the materials presented in this work are free of doctrinal or moral errors. Bernadeane Carr, STL, Censor Librorum, August 10, 2004